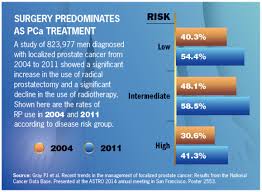 Men with locally or regionally advanced prostate cancer treated initially with radical prostatectomy (RP) and adjuvant radiotherapy (RT)* may have a lower risk of prostate cancer–specific death and improved overall survival (OS) compared with men treated with radiotherapy, according to research published in Cancer.
Dr Jang and others evaluated 13,856 men with high-risk to very high-risk prostate cancers. The cohort included men with locally advanced disease and regionally advanced disease. Both treatment groups were matched by age, race, comorbid conditions, as well as tumour and nodal stage to control for factors that may influence outcomes. They then analysed which group fared better 10 to 15 years after treatment.
The study found men who received surgery (RP) followed by radiotherapy (RT) were less likely to die from prostate cancer and lived longer in comparison to men who received only radiotherapy. During the study, 702 men died from prostate cancer.
10-year prostate cancer–specific survival rates for men with

The study showed that, regardless of tumour stage or grade (Gleason score), the 10‐year prostate cancer–specific survival and 10‐year overall survival favoured men who underwent surgery followed by radiotherapy.

Men who had combined therapy however experienced higher rates of erectile dysfunction (28% vs 20%) and urinary incontinence (49% vs 19%).

*When radiotherapy only was used, it was combined with androgen deprivation therapy (drugs that block testosterone).